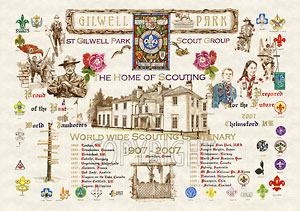 From the many requests we have received we thought we should give an update on the Great Kiff. He has accepted that he will be known as the Great Kiff after his superb Puffin Ninja training by the Great Ninja Puffin. Our Kiff will become wise and wonderous to all people. His first day of training went well, the first day of training was the Day of Pain. In which our Kiff was placed in a tiny crate with nothing but his mind, where he had to successfully open an emergency tin of tuna with nothing but his new Puffin mind. Early reports say there was much wimpering and crying, but we eventually had success.

Meanwhile on the Scouting front, those of you who know the Cilben Collective Master, Cilben. Might know he is a bit of a history buff, after reading the following this morning it got me thinking about our Scouting origins and homes.

On this day in 1793, George Washington lays the cornerstone to the United States Capitol building, the home of the legislative branch of American government. The building would take nearly a century to complete, as architects came and went, the British set fire to it and it was called into use during the Civil War. Today, the Capitol building, with its famous cast-iron dome and important collection of American art, is part of the Capitol Complex, which includes six Congressional office buildings and three Library of Congress buildings, all developed in the 19th and 20th centuries.

This reminded me of Gilwell Park, London. A fantastic place as the home of Scouting in the UK. I’ve only been a couple of times, but it always does feel like it is ‘home’ to Scouting.  But then I always feel similar to that when I turn up to other Scout camp sites, I think it’s because you can feel the energy and the feel that it is a place of fun and enjoyment. Even when a camp site is empty or early on a morning just before everyone gets up for the day. Usually there is a morning dew, and a chill in the air and all you can see is a field covered in multi coloured tents. I would recommend to everyone to go and see Gilwell at least once, but to also support your’s and local Scout camp sites, as these are often sites that help support Scouting in those local areas. Not only does it bring in some money, but it’s giving local Beavers, Cubs, Scouts and Explorers that vital adventure of camping.