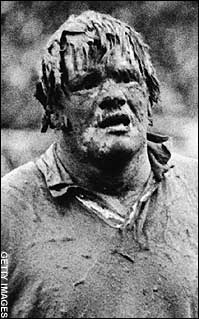 On Saturday 2nd of Feb, I completed the Rugby – Watching Gloucester challenge.

I will openly admit that it was one of the easier challenges, however, as a father of two young kids, it is always a pleasure to find some free time to enjoy a couple of beers and a game of rugby – especially if it is live rugby.

A must give a Big **THANK YOU** to Mrs Kiff for allowing me the opportunity to have this day out and I am sure that she will take the opportunity in the near future to do that same sort of thing and leave me to look after the kids (I hope so, we all need a little break now and again).

So to the rugby; I and two other dads caught the train into Gloucester around lunch time and availed us of a local hostelry for some lunch before the game. We then headed to the Kingsholm Stadium the game we had come to see was Gloucester vs Bath in the LV trophy.

Sadly it was not the greatest game of rugby, Gloucester was already out of the competition and you could tell from the way they played. Once they had gone two scores down they just seem to give up and Bath capitalised on this making the final score 5-32 to Bath. What one would call a drubbing in the end.

To complete our rugby day we stopped off on the way back to the station at another hostelry and with it being the first weekend of the 6 Nations we watched the Scotland vs England game. As a Scot I was very hopeful of their performance, I never expected Scotland to beat England. However to not get a drubbing like Gloucester was a major positive and Scotland look for the first time is some years to have a team that may not get the Wooden Spoon.

I think all three dads enjoyed the day out and I hope that we can repeat it a few more times before I am Forty.